What better activist to feature this week than the author of “Civil Disobedience”?

Before we get into the profound works of Henry David Thoreau (HDT), let’s back up and look at his early life.

Henry David Thoreau (1817-1862) was born in Concord, Massachusettes, a place where he would end up spending most of his life. At a young age, he proved to be an adept scholar and went from public and private school to Harvard, graduating in 1837. At the time, graduating from an esteemed university created a clear path to a life in ministry, law, medicine or teaching. However, Thoreau found himself uncomfortable in the first three and decided to follow after his elder siblings, John and Helen, and become a teacher.

During the late 1830s, the country was in an economic depression and jobs were scarce- creating an unstable climate for the graduate. Thoreau fell back on his family’s business: pencil making. Thoreau pencils became a household name and the product considered to be the best in the country. However, Thoreau would later call this lifestyle- and the lifestyle of most Americans trying to make a living- a “quiet desperation”.

In 1838, Henry found himself longing for more and recruited his brother, John to open a school together and they settled into the routine of their independent work as educators. But, Henry could not be settled for long. The new venture of running a school with his brother, John, was cut short when John stepped back from their school after becoming ill. The weight of the school crashed down on Thoreau and he closed its doors just a few short years after they opened. Henry was, once again, falling on the family business to make a living.

During this time, it seems that Henry began to harness the ideas he became so famous for. The typical week of an American consisted of six days of work, and one day of rest. This routine began to wear him down.

Henry befriended his neighbor turned mentor, Ralph Waldo Emerson, who had already reached the height of his fame. Emerson, well known as a great American philosopher, began to teach Henry about Transcendentalism. This is an “American version of Romantic Idealism, a dualistic Neoplatonic view of the world divided into the material and the spiritual. For Emerson, ‘Mind is the only reality, of which all other natures are better or worse reflectors. Nature, literature, history, are only subjective phenomena.’ In short, the perfect Transcendentalist would not value material possessions and focus on the Spiritual.

Soon after he started work with his family in the pencil factory, Henry also agreed to become a live-in handy man for Emerson. During this time, their discussions harnessed Henry’s desire to write and Emerson helped him publish some short essays and poems in The Dial, a Transcendental journal. However, the busy day-to-day work of the pencil factory and noisy household caused him to look elsewhere for some peace and quiet for his writing.

Thoreau reminisced at the time spent in a cabin in the woods during a summer. This memory sparked a desire to create a place of solace for his new passion to become a writer. Soon after, he received permission from Emerson to use some property on Walden Pond to build a small cabin. Thoreau soon erected a small house out of building supplies and a chicken coop and moved in July fourth 1845.

But the retreat to the woods was not only a quiet place to write; Thoreau also took the opportunity to conduct an economic experiment. As mentioned before, the typical American worker used six days to work, and one to rest. Thoreau’s experiment revolved around reversing this: one day of work, and six days of rest and focusing on more Transcendental concerns. His more natural work would come later. 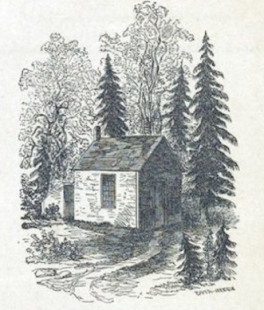 This natural retreat gave him the artistic space to create his first book, A Week on the Concord and Merrimack Rivers. In this, Emerson’s influence was clear, but Thoreau painted a more natural and environmental reality to the Transcendental philosophy. The book was also a tribute to his late brother, John, who died of a prolonged illness. He would not publish this work until 1849, however, it did not sell nearly as well as he expected. The failure became attributed to a “looseness of structure and a preaching tone unalleviated by humor, that had put readers off in the first book.”

Thoreau stayed in the house at Walden Pond for two years, from July 1845 to September 1847. However, Walden, his second book, condenses the experiences of those two years into one year for “artistic unity”. Because of the relative failure for A Week to sell, Thoreau delayed publishing Walden until 1854 to make sure he edited the problems out from previous criticisms of his work. The patience and diligence of this second book paid off; Walden became a small success with promising reviews.

During his two years at Walden Pond, Thoreau spent one night in jail for refusing to pay a toll tax and this would become the foundation for his later work in his essay, “Civil Disobedience” (or “Resistance to Civil Government”).

After leaving the cabin, Thoreau rented a small bedroom in his parents’ house and made a modest living for the remainder of his life. He died in May 1862 of the tuberculosis which had plagued him since his college years. He left behind a comprehensive record of natural phenomena around Concord, extensive notes on American Indians, and many volumes of his daily journal jottings.  At his funeral, his friend Emerson said, “The country knows not yet, or in the least part, how great a son it has lost. … His soul was made for the noblest society; he had in a short life exhausted the capabilities of this world; wherever there is knowledge, wherever there is virtue, wherever there is beauty, he will find a home.” Emerson’s assessment would soon prove to be correct; Thoreau’s work did not become popular until after his death.

One of his most profound works revolve around nature. His books reflect his love for enjoying the outdoors and the preservation of these natural wonders. His work centers on comparing natural phenomenon to the mind and connecting Transcendentalism to the two.

Thoreau’s nature study became more scientifically serious and less Transcendentalist in his later works. “The Succession of Forest Trees,” which he delivered as a lecture to the Middlesex Agricultural Society on 20 September 1860 and published in The New York Weekly Tribune, marks this turn in Thoreau’s career. Like many others, he had purchased and read Charles Darwin‘s On the Origin of Species by Means of Natural Selection; or, The Preservation of Favoured Races in the Struggle for Life when it was published in 1859. This book, together with other readings in forestry and natural history, provided the basis for the new studies. “The Succession of Forest Trees” still bears the mark of Thoreau’s character; it is written with the usual irony and humor. Nevertheless, it deals seriously with seed dispersal and the growth of Northeastern forests. Its systematic philosophical import is to be found in Thoreau’s continued emphasis on a cosmos of growth, cultivation, and change. “Nature again establishes the basis by which human beings must gauge their own lives.”

“A single gentle rain makes the grass many shades greener. So our prospects brighten on the influx of better thoughts. We should be blessed if we lived in the present always, and took advantage of every accident that befell us, like the grass which confesses the influence of the slightest dew that falls on it; and did not spend our time in atoning for the neglect of past opportunities, which we call doing our duty. We loiter in winter while it is already spring.”

Some people are not aware of Thoreau’s extensive work with abolition. Thoreau dedicated a great portion of his life to being a conductor of the Underground Railroad. He also wrote essays on the work and death of John Brown, a radical abolitionist who tried to spark a slave rebellion by taking over a federal arsenal. This was a cause Thoreau carried with him his entire life.

“There are thousands who are in opinion opposed to slavery and to the war, who yet in effect do nothing to put an end to them; who, esteeming themselves children of Washington and Franklin, sit down with their hands in their pockets, and say that they know not what to do, and do nothing.”

This, arguably, is Thoreau’s most famous work. Throughout his life, he fought the government by avoiding taxes of any sort. But the person who explains Thoreau best is Thoreau himself:

“There will never be a really free and enlightened state until the state comes to recognize the individual as a higher and independent power, from which all its own power and authority are derived.”

“If a thousand men were not to pay their tax bills this year, that would not be a violent and bloody measure, as it would be to pay them, and enable the State to commit violence and shed innocent blood. This is, in fact, the definition of a peaceable revolution, if any such is possible.”

Thoreau continues to be an inspiration for activists in multiple fields. It is very seldom that one person can touch upon so many lives and for centuries after they’ve died. It is always best to read quotes within the context they were written. Please, do yourself a favor and run to the library to check out his work!

Have a suggestion for an activist to feature? Give us a shout!